How to guides and tutorials

This documentation has moved!

The updated documentation can be found here.

In order to save your projects or play multiplayer games you need to have a NetsBlox account.

Open the editor and click on the cloud icon, there you will find the signup button. When you are filling the form make sure to use an up to date and working email address. After you sign up a password will be emailed to you. Go to your email copy the password and come back to the editor. You can then change this password via the "change password" option in the same cloud menu.

* If you can't find the email from NetsBlox, make sure to check your email's spam folder.

How to send and receive messages

Message sending and receiving can be done using the following blocks: 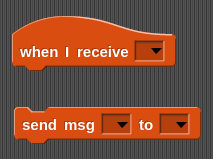 The message handling block contains a dropdown for setting the message type for which it listens:

Upon receiving a message, these variable blocks will be set to the values received in the given message. In the above example, this allows the user to retrieve the values sent for role, row and column.

Like the message handling block, the send msg block also contains a field for specifying the message type:

After setting the message type, the send block will update to provide inputs for each of the expected inputs:

The empty input fields contain grey-ed out text displaying the field name for the corresponding input. These inputs can be filled just as any other block input slot:

Finally, the block only needs to specify to whom we want to send the given message. This is specified using the last dropdown:

After selecting the role, the message can be sent! In the following example, the block will send a TicTacToe message with the role field set to the role name of the sender, the row field set to 3 and the column field set to 4. This message will be broadcasted to everyone else in the room (not including the sender).

How to use services (RPCs) 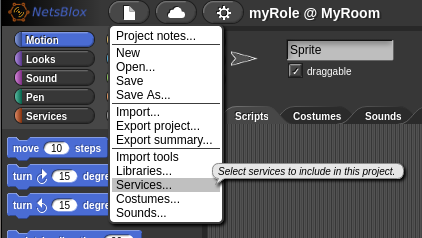 Then select the desired Service to import from the dropdown: 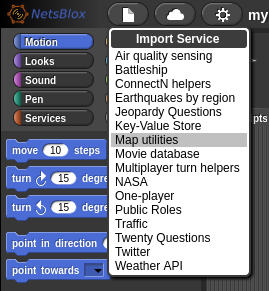 Now, the map rpc blocks are available under the "Custom" tab: 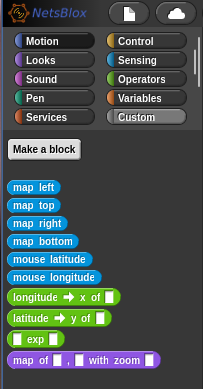 Then you can use the provided blocks to leverage the NetsBlox service: 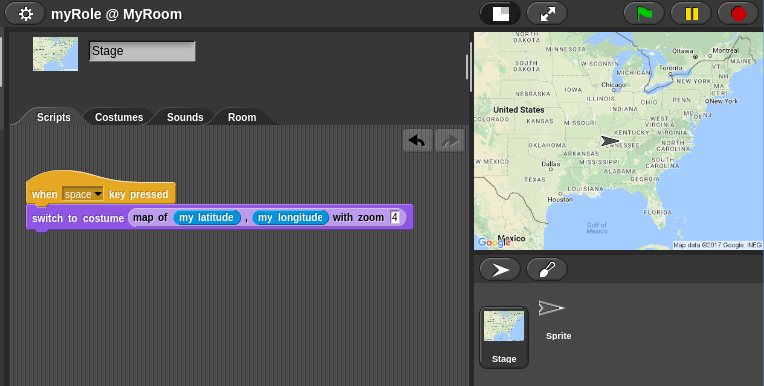 How to manage a room

The owner of the TicTacToe game can use the room tab to add new roles to the room (using the "plus" button), add/remove roles, rename roles and invite other users to occupy different roles in the given room. This is done by clicking on the given role in the room tab:

From this dialog, there are a number of supported actions:

However, if a user is already occupying the given role, then the dialog also allows the owner to evict the user. This will remove the user from the owner's project:

Roles can be renamed by clicking on the name of the role:

How to work with custom messages

A number of the Services include predefined message types to be used with the given service (such as the TicTacToe, Earthquakes and Battleship services). However, there are many cases in which a user may want to define a custom message type. This can be done by first clicking on the "Make a message type" block in the block palette under the "Services" tab: 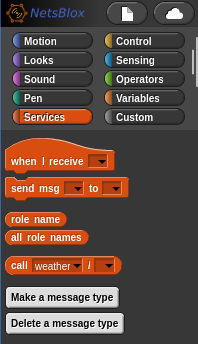 This will open the message type creation dialog. This dialog provides an interface for specifying the name and fields for the given message type:

After selecting "OK", the given message type will be created! An example of creating the TicTacToe message type used throughout this example is shown below:

In this example, the name has been set to "TicTacToe" and the fields input has been extended to have three slots (by clicking the right arrow). These fields have been named "role", "row" and "column".

How to play multiplayer games

What are rooms in NetsBlox

The NetsBlox Room defines the local network for a given application. A room can contain a number of different roles which are distinct NetsBlox clients running in their own window or machine. For example, a TicTacToe game may consist of two roles, X and Y, which represent the two players in the game of TicTacToe: 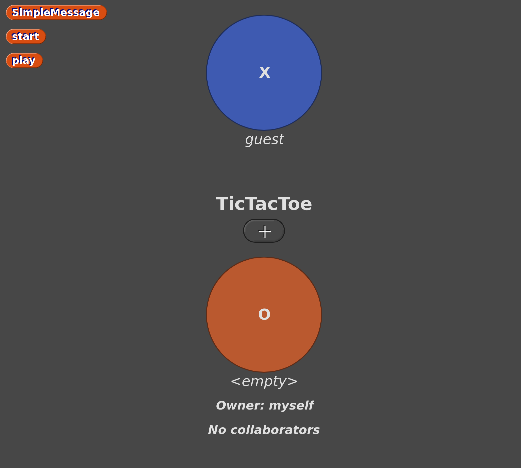 Remote messaging allows users to send messages over the internet between different instances of NetsBlox, enabling users to create distributed, online apps. Unlike events, messages can contain a structured data payload. That is, they can be used to send information between NetsBlox scripts and users. The structure of messages is defined in a message type. A message type contains the name of the message as well as the names of the expected fields of the message. For example, a message type may specify a type of message called "TicTacToe" that contains "role", "row" and "column" fields.

Services are provided by the NetsBlox server and allow the client to easily incorporate third party utilities (such as Google Maps, MovieDB, Weather, and Traffic data) as well as simplifies the creation of games which otherwise may be more complex (such as Battleship and ConnectN).